Joe “Tuna” Centrone is a seaport legend, well known in New York’s food industry for his charismatic personality, charming wit, and skills in any kitchen. Born in Woodside, Queens, New York, Joe was raised in a working class neighborhood of mostly Irish, German, and Italian immigrants. 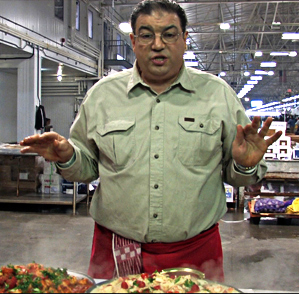 is father Sal and mother Clara were Italian immigrants from a small town in Bari, Italy called Palo del Colle. Joe came from a very large family. As a kid, Joe spent a lot of time watching his grandmother prepare food. Back then, people bought their bread from one or two bakers and their fish, meat , fruit and vegetables were always from the same vendor. They were your friends, and you always went back to your friends. Joe learned a lot watching his grandmother and mother cook and shop for food. With the things he learned in his mother’s kitchen and from his father in his Luncheonette, Joe took over the short order cook’s duties at his father’s bar in the summer when he was 13. It was just hamburgers, french fries and meatball heros but how many 13 year olds do you know that spent their summer vacations cooking in a bar kitchen?

Joe took those lessons with him when he landed at Terry’s Seafood in Queens as a purveyor, in 1980. It was there that Joe gained his reputation in the Seafood Industry. Tuna underwent lap-band stomach surgery in 2005 and shed 80 pounds. Today, Joe lives a healthy lifestyle. Joe Tuna has world-class taste, loves to cook, eat, tell old stories, and occasionally smoke a good cigar.